Cultivating a garden is no mean feat, especially if you intend for it to house a variety of vegetables and herbs, all with different properties and requirements.

There is a common misconception about vegetable plantations-one which entails that ample sunlight is imperative. Certainly, there are plants that thrive in the sun and require a minimum of 6 hours of light a day for optimum growth (these timings can extend up to 10 hours). But there are vegetables on the other end of the spectrum, ones that grow in, and indeed prefer, shade.

The aforementioned shade can be classified into different categories- light, partial, and deep. Light shade is generally a term used to describe a situation wherein the plant would receive around 4-6 hours of indirect, fluctuating light.

Shade can be attained naturally or manufactured- you can have a naturally occurring shady spot in your garden or construct a shady area with the help of fences and larger trees.

[Pro Tip: Perennials tend to perform well in shade. They are also low-maintenance.]

Following is a list of vegetables you can grow in your garden that exhibits an affinity to shade. 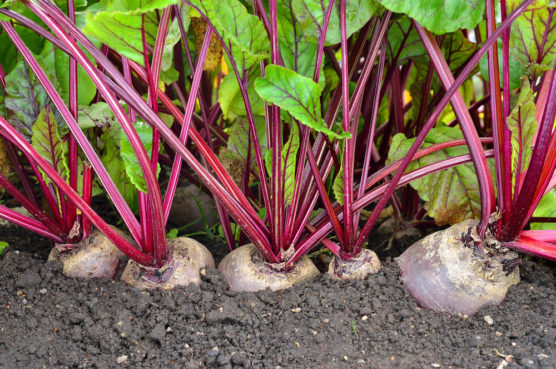 A root vegetable, beets grow well in both the sun and in the shade. The shade allows it a more natural flavor, mellow and earthy.

The roots do tend to be slightly smaller due to the diminished exposure from the sun, but on the flip side, the beet greens show a rather remarkable growth! Beet greens are an added benefit of consuming homegrown beetroots, they are nutritious and are the kind of leafy green that is not readily available at the store. 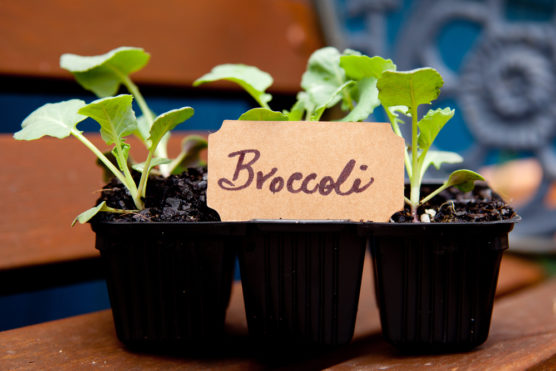 Contrary to what one may think, broccoli is in actuality quite an easy plant to grow. The two primary factors which contribute to an uninterrupted growth are ample water and an absence of weeds.

Experienced horticulturists have stated that broccoli grown in the shade have an edge over their counterparts cultivated in the sun. The reason is manifold- the first and most relevant point is the flavor, which tends to be better.

Additionally, overexposure to sunlight leads the plant to a premature ripening which comes with early flowering and looser heads- neither of which are desirable outcomes. 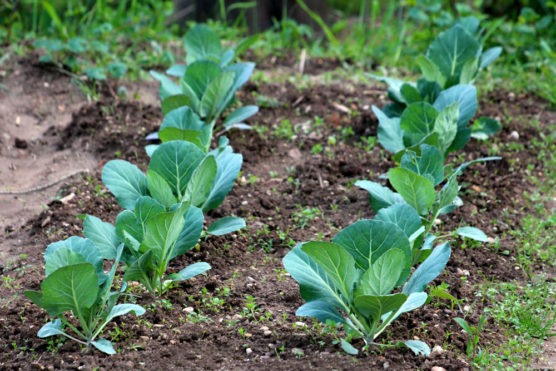 Cabbage tows a tricky line between light and shade, one wherein 4-6 hours of light is important, but so is the presence of partial shade to shield the crop from direct sunlight which dries out the outer leaves and moves its way inward.

Cabbage is a cool-season crop, but the availability and implementation of the right amount of shade enable it to be grown in warmer climes, too.

The presence of shade also leads to larger cabbage heads, which is the desired result. 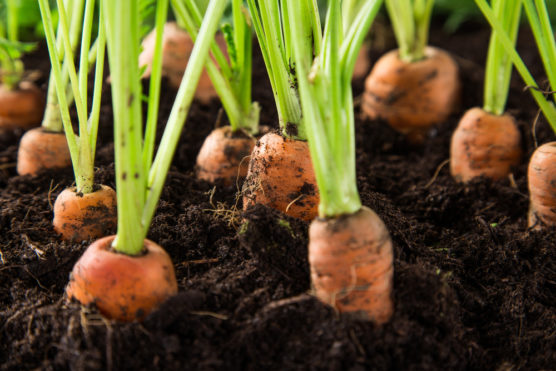 Another nutritious root vegetable like the beet, carrots grow remarkably well in shade. Partial shade also causes the carrot tops to be of far better quality, they grow to be greener and leafier than normal.

Carrots call for a little extra attention than some of the other vegetables on the list- nematodes, gnarly roots, and rotting seeds are some of the common maladies. 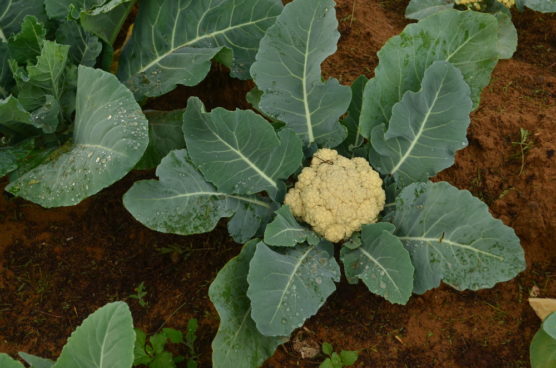 Another rather tricky vegetable, cauliflower is both diverse and does a lot of good to the soil in terms of the addition of essential nutrients. It has some specific stipulations, especially regarding safe temperatures.

Although primarily a crop that tends to do better in the sun, cauliflower growth can definitely benefit from partial shade, especially during the summer months. It is a cool-season crop, and the shade helps regulate the temperature and neutralizes the effect it has on the growth of the vegetable. 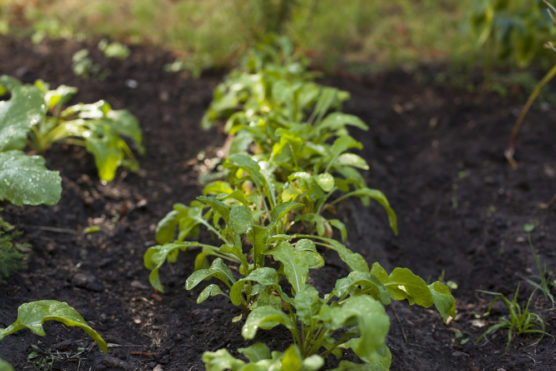 Arugula is considered a fast-growing leafy green, and is recognized and loved for its peppery taste. This is a herb well suited for plantation in your kitchen garden, it has a natural affinity to partial shade and dappled light.

Rich, well-drained soil is a prerequisite. 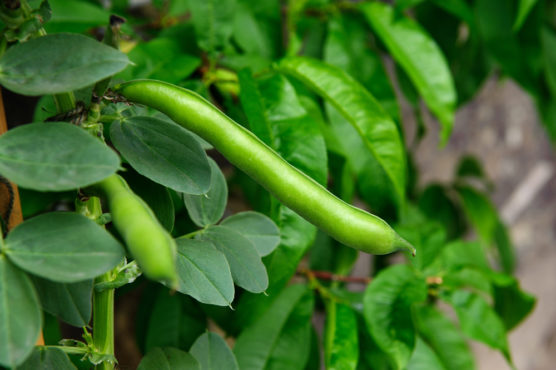 Beans, no matter what people might tell you, are low maintenance plants. There are several different varieties of bush and pole beans that are both non-invasive and thrive in shade.

This plant grows well in the sun, too. Rich soil that retains moisture stimulates better growth. 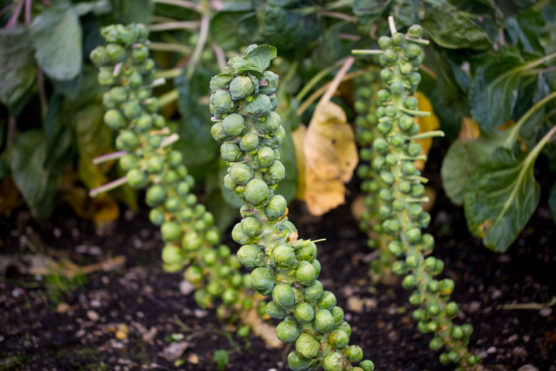 A small member of the cabbage family, brussels sprouts have a distinctive, pleasantly bitter flavor that works very well with acidic elements in salads and wraps.

It is a cool-season crop- which is the primary reason why growing the sprouts in shade is eminently suitable. Prolonged or direct exposure to the sun causes the leaves to wilt and shrivel in addition to a significant loss of flavor.

Brussels sprouts are a slow-growing plant- it may take a while for the first sprout to appear. It is a good idea to plant a faster-growing crop in between the rows. [Peas and beans work well.] 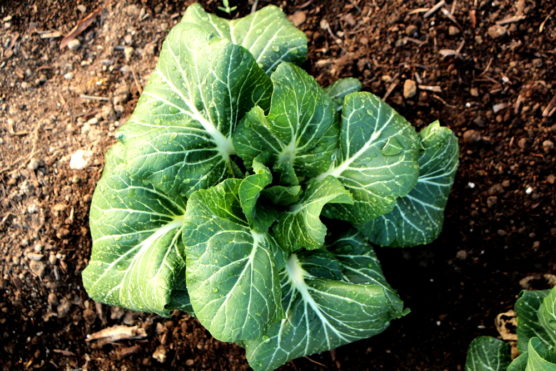 Another cabbage relative, collards are perhaps closer to spinach than they are to a cabbage. The plant is dark green and has broad leaves that curl up slightly around the edges. They also have prominent white veins, very similar to the patterning on a cabbage.

Collard greens ideally require a few hours of sunlight a day for maximum flavor. However, they are cold season crops, which means that overall growth is stimulated by shade. The shade is also important in order to chart a sustainable future for the plant.

The soil in which you are growing the plant should be well-drained. 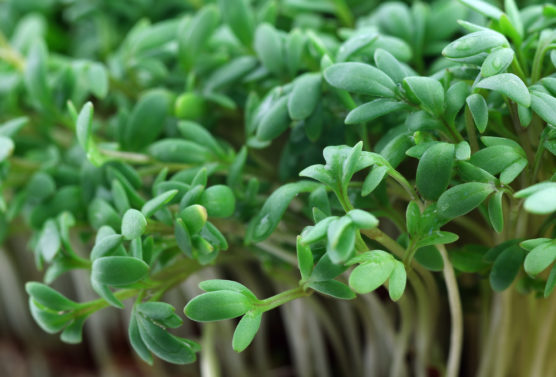 Cress (also commonly referred to as garden or pepper cress) is the one vegetable that exhibits excellent results in full shade.

The soil in which you are cultivating the cress should be regularly turned out, and thereby, loose. Good drainage is imperative.

Pro Tip: Cress has a peppery, almost sour taste that makes it a valuable addition to soups and salads. 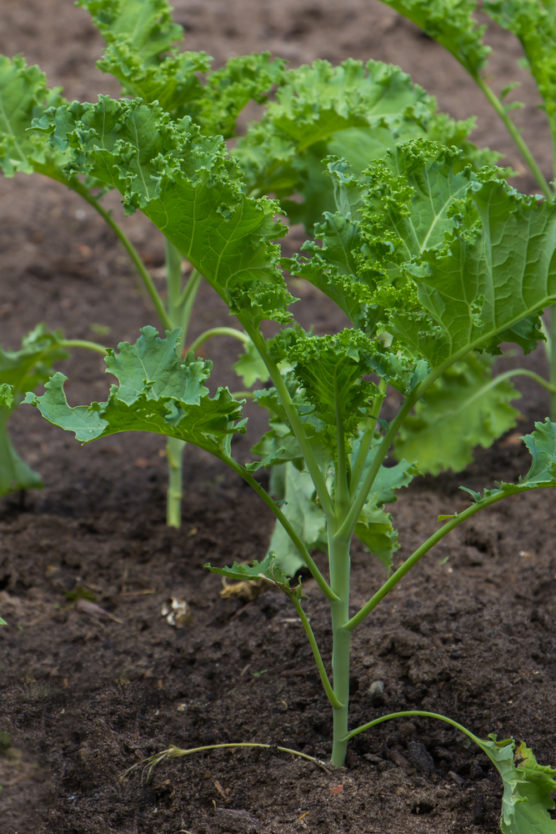 Yet another cold season crop, kale enjoys the shade. Rich, moist soil is a prerequisite.

Kale prefers cool climes and thereby is a good choice for shady areas in your garden.

A cabbage relative that has recently attained a top place in the health food market, kale is dark green and has an odd, almost woolly texture. 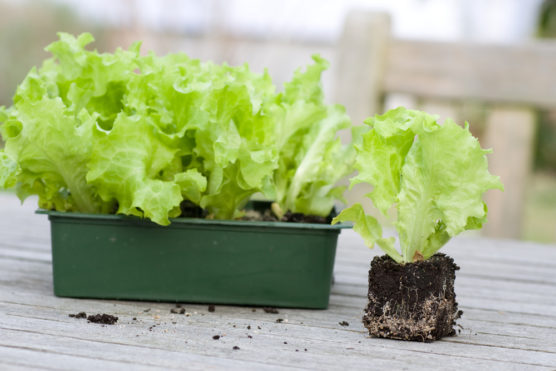 A staple in any home( I know I can speak for myself when I say this!), lettuce loves the shade. In fact, reports have brought to light the practice of gardeners manufacturing special shade cloths in order to protect their produce from the sun.

[Direct exposure to the sun causes wilting and scorching.]

Lettuce is pretty low maintenance- one has to make sure the soil is rich and well-drained. 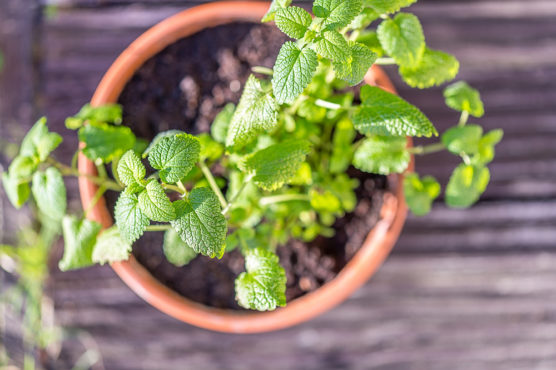 A handy herb to have around in your kitchen, and especially flavorsome if home-grown.

Mint is a fast-growing plant- in fact it grows so fast that if not regularly pruned, it can take over a larger space than intended.

Water regularly, and ensure a couple of hours of indirect light a day. 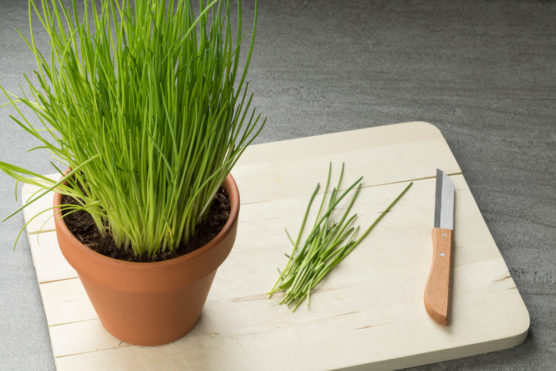 When cultivated in hot climates, chives prefer the shade to the sun. The shade prevents overexposure to direct sunlight, which causes the stalks to harden and wilt.

Chives grow in clumps- individual stalks that are joined at the bottom. They can grow up to 12 inches, with an average height of 6-8 inches.

Chives can be plucked or cut, depending on the requirement. The soil in which you plant the chives should be well-drained, thereby ensuring that there are no chances of rotting. 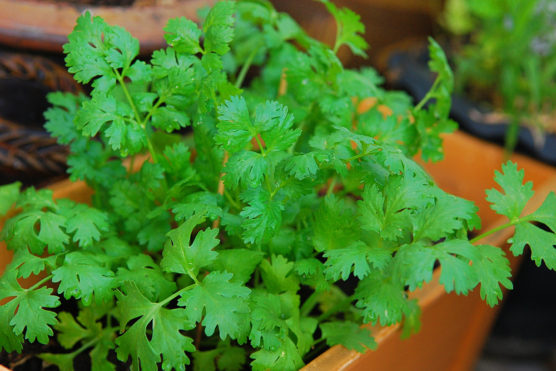 A great vegetable that flourishes in the shade, there is a very good reason why cilantro should be grown out of the sun. Cilantro bolts and sets seeds when in the sun, which is why horticulturists recommend partial shade. The shade also keeps the leaves from wilting too quickly.

Cilantro leaves are a popular garnish and the seeds( when cilantro does bolt) are widely used as a condiment. 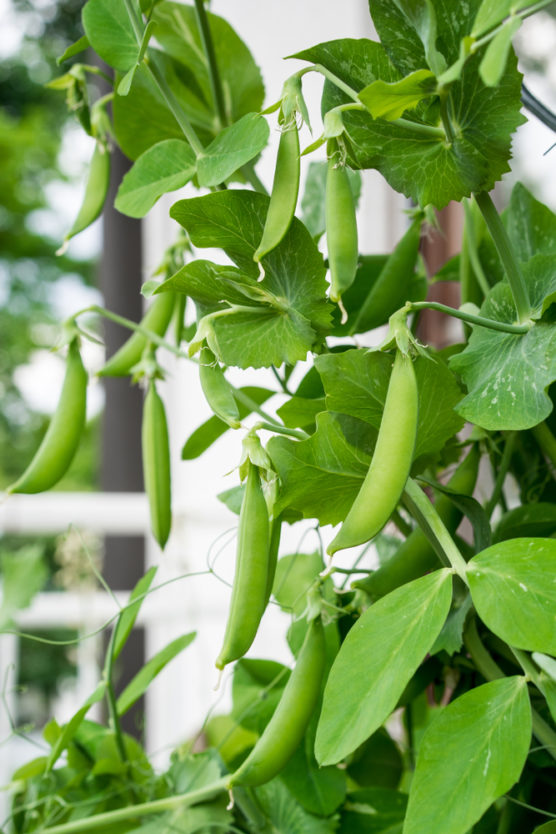 Peas are tailor-made for shady spots, given that the timing is right. Peas like cool climes and the key to getting a good pea crop are to make sure the soil is right and that they are harvested before the weather gets too hot. The soil should ideally be able to retain moisture, as peas benefit from that extra water.

Peas are space-saving crops too, they can be planted in alternating rows between slow-growing plants. Pea trellises are also common, and highly effective. 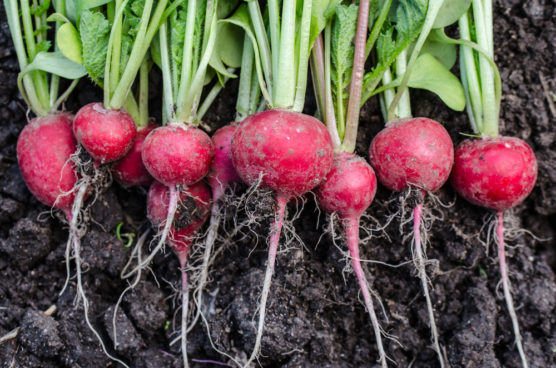 Another root vegetable that benefits from the partial shade, radishes are highly nutritious and also produce delicious greens( certain varieties only).

They like sandy or loamy soil, coupled with frequent watering to ensure that the soil drying out does not lead to a hardening of the stalks.

There are a few different varieties of radishes that can be grown in your garden, depending on requirement and preference. Some are fast growers and mature early, some have a natural affinity for the fall and some are bulbous and large. Take your pick! 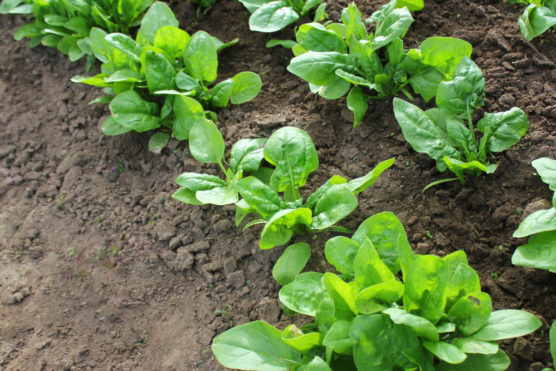 Like cilantro, spinach top bolts and sets seeds when out in the sun- which is why shade is a good idea for cultivating this leafy green. Spinach has an affinity for the fall and winter months, and is regarded a seasonal vegetable because of the appreciable difference in quality during winter.

Rich, well-drained soil is imperative, as is a couple of hours of sun for freshness. Overexposure should be avoided, as it can scorch the leaves( especially in the case of baby spinach). 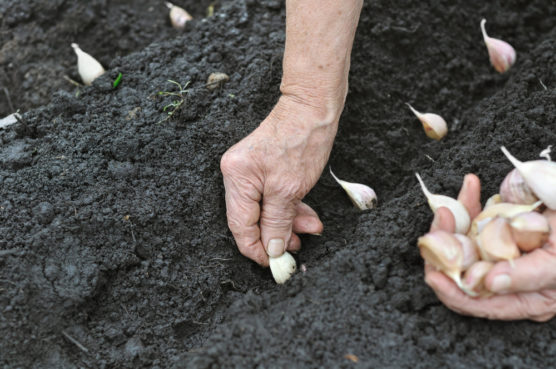 No kitchen is complete without garlic, is a saying that I have lived by. And what better way is there to incorporate a little garlic into your everyday food than to have it grow in your very garden?

A natural lover of shade, garlic can be grown by planting individual cloves in rows, covered by a half to one inch of fine soil, and a few inches of mulch for added protection.

Garlic is a slow grower and typically takes nine months to mature. It should ideally be planted in early fall. 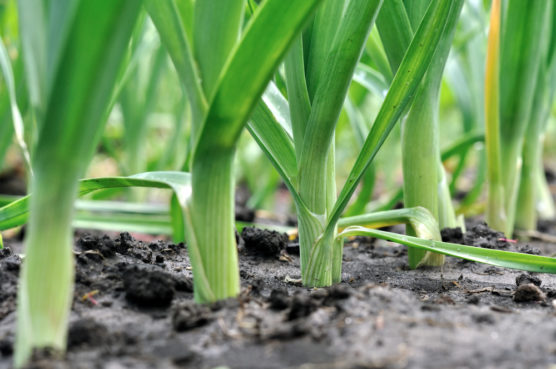 A relative of the onion and also of the shallot, leeks are a plant I have recently come to like. A lot.

Growing them can be rather complicated- they like the shade but also need the sun. They grow as small bulbs at the base of each plant, which becomes larger as they mature. Leeks can be grown from leeks- with the base sprouting in a week or so when given access to adequate water and light.

Leeks can take a considerable amount of time to mature and this duration usually varies between 25-40 weeks.

A staple in every home, potatoes are vegetables universally consumed, regardless of country and cuisine. While sun and water are important factors that stimulate growth, potatoes are also root vegetables. This means that they are partially obscured by soil, and thereby do not always require the sun. In fact, they can coexist very well with shade, given that the daily requirement of light is fulfilled with timely diligence.

Potatoes can take anywhere between 2 months and 6 months to be properly mature, which is one of the reasons why there is not a fixed harvesting season. They can be harvested all year round.

Potatoes should ideally be grown in soil that is moist, but not wet.

And with this last vegetable, the vegetable which is arguably consumed in the greatest quantities across the world, we come to the end of the list.

Now you know what to do with the shady corner of your garden that lies unused and you know exactly which plant to grow in it! Don’t you? 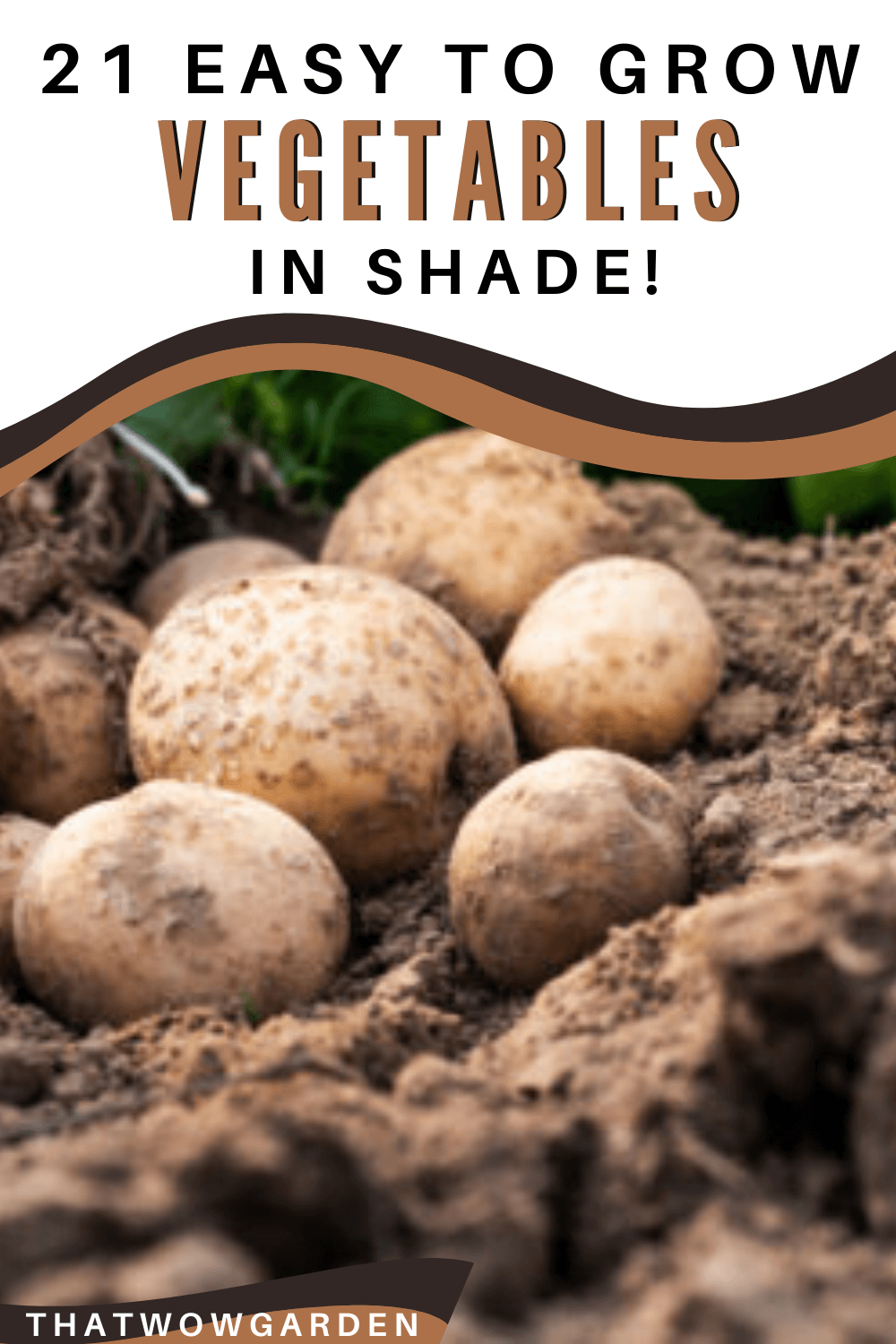